The search for a sustainable and just future, not just for humanity but for all life on Earth, has become one of the most pressing issues of the 21st century. Experience has shown that just giving information about education for sustainable development may not be effective in producing the lasting change in behaviour patterns. Mainstreaming faith-based values in education for sustainable development is perhaps the surest way to achieving this. Faith-based values can make a significant contribution towards the wise use of natural resources since they help propagate values of common humanity (Kenya Organization for Environmental Education, 2015). It has been argued that the environmental crisis of our times is a reflection of a spiritual and moral crisis. It has thus been contended that the loss of a moral and spiritual conscience provides the basis for the over-exploitation of the environment, without any consideration for other living creatures or for the ability of future generations to make a living, thereby defying God’s plan for human beings to be good stewards of the environment.

Given that many Africans are sentimental to their religious beliefs, a possible strategy to minimize the environmental degradation in Africa is to link environmental education and sensitisation with the belief system of various people, be they Christians, Muslims or other traditional worshippers. Former UN Assistant Secretary-General, Olav Kjørven, once described faiths as “potentially the biggest civil society movement on climate change in history” and “the biggest mobilisation of people and communities that we have ever seen on this issue.” With this came a new recognition faiths have a crucial role to play in protecting our planet. Nowhere is this truer than in Africa – where more than 90% of the Continent’s population describe themselves as either Christian or Muslim. For example, out of a population of 819 million people in sub-Saharan Africa, 470 million are Christian and 234 million are Muslim (Alliance of Religions and Conservation, 2012). Moreover, faith draws huge influence and trust, often trusted where, governments and military are not. Faith is crucial to the challenge of changing perceptions and behaviour if there is to be a co-ordinated response to protecting our planet.

Religion plays out its role in environmental conservation and protection by its beliefs and teachings; it guides the relationship between man and nature, it offers moral framework. The major religions; Christianity, Islam, Judaism, Buddhism and Hinduism have adopted similar approaches or traditions that are geared towards environmental conservation. These are: dominion: humans at the top of Creation and using natural resources as needed; Stewardship: humans having a delegate dominion over Creation and being responsible and accountable for their use of natural resources, empathy: nature is affected by human misbehaviour and God and worship: nature gives glory to God and nature is sacred. These approaches correlate and they all complement each other (Ecolife, 2017)

A comparative analysis conducted by Kenya Organization for Environmental Education (KOEE) and the Alliance of Regions and Conservation (ARC) in project aimed at mainstreaming religious values into education in Kenya in 2015; revealed that the faith-based values in relation to Environmental Care and sustainable development are similar across faiths (KOEE, 2015). An illustration of the faith-based values is outlined in Table 1.

Even though some work has been done across Africa to address the aforementioned sustainable development issues; the area of mainstreaming faith-based education for sustainable development in education still remains not fully explored (ARC, 2012). Mainstreaming faith-based ESD into school curriculum can can make a significant contribution towards the wise use of natural resources since they help propagate the Earth Charter principles of: respecting the Earth and life in its diversity; caring for the community of life with understanding, compassion and love; building democratic societies that are just, participatory, sustainable and peaceful and securing the Earth’s bounty and beauty for the present and future generations. Religion can be a powerful inspiration for environmental conservation and protection among learners; born from the fact that almost all religions uphold protection of the Earth’s diversity and its beauty as a sacred trust given to man by God. Faiths can champion environmental sustainability through schools by integrating religious values that enhance environmental conservation, particularly considering the great influence they have on the learning institutions as well as the communities from which they draw membership. Thus as strategy for sustainability, faith-based ESD takes recognition of this potential in religions can enhance attainment of education for sustainable development. 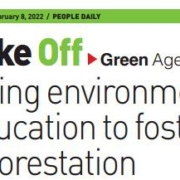