Among the global Sustainable Development Goals (SDGs) by the United Nations is goal 13; Climate Action. This target is on the need for the global community to fight climate change. Climate change is a change in the pattern of weather, and related changes in oceans, land surfaces and ice sheets, occurring over time scales of decades or longer. Climate change may be due to natural processes, such as changes in the Sun’s radiation, volcanoes or internal variability in the climate system, or due to human influences such as changes in the composition of the atmosphere or land use (AAS).

Affecting various economic pillars like the agricultural sector, climate change has greatly impacted global economies.  Increased frequency of prolonged droughts, which have cost lives of people in different parts of the world for lack of food and water, among a myriad of other challenges, are a strong driver for urgent action. Climate action can be in form of mitigation and adaptation.

Adaptation refers to strategies for coping with climate change impacts already being experienced including extensive water harvesting during rainy seasons, irrigation farming, large-scale infrastructure changes – such as building defences to protect against sea-level rise or improving the quality of road surfaces to withstand hotter temperatures– as well behavioural shifts such as individuals using less water, farmers planting different crops and more households and businesses buying flood insurance.On the other hand climate change mitigation refers to strategies that aim to prevent and reduce impacts including mass tree planting and growing to absorb more carbon in the atmosphere (increasing forest cover), increasing energy efficiency, phasing out fossil fuels by switching to low-carbon energy sources, and removing carbon dioxide from Earth’s atmosphere for example, through improved building insulation. All these can be viewed as components of transitioning towards a Green Economy.

The adaptation and mitigation plans for climate change should be an individual, national, regional and global affair as suggested in SDG 17 that calls for more partnerships and concerted commitments to meet the global goals needs, climate action not excluded. Moving forward, each person needs to make a commitment to do their part to address this menace, regardless of how small. At national level there should be proper political will from governments and commitment to fight climate change alongside the regional and global community through forums like the United Nations Framework Convention on Climate Change (UNFCCC), Intergovernmental Panel on Climate Change (IPCC) among other avenues that are in the climate change discourse.

Worth celebrating is the global community adoption and ratification of ” The Paris Agreement” and other related treaties and millennium environmental agreements (MEAs) that are geared towards addressing climate change. This is indeed a reassurance in the quest to achieve sustainable development through the green agenda and leave a habitable world for future generations. 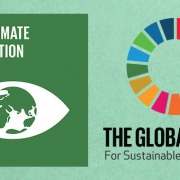 Alvin Henry Teacher Training for a Dynamic World of Work

Alvin Henry The Role of Media in Climate Action